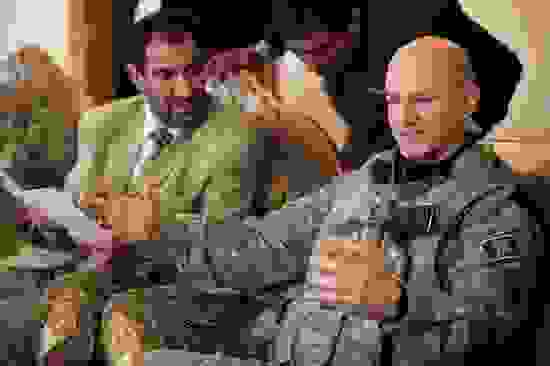 Captain Lansden has a special family history connected to Louisiana’s 5th District. During the Depression, his grandfather worked all over Northeastern and Central Louisiana as a chicken farmer. Upon his death, Captain Lansden’s grandmother and father were left on their own. His grandmother took a teaching job with the Coushatta Tribe of Louisiana. His grandmother and her children traveled and lived all throughout the 5th District of Louisiana wherever she could find work as a school teacher. Captain Lansden’s family finally settled in Southern Tangipahoa Parish where his grandmother lived out the remainder of her days as a school teacher and an active member of the Presbyterian church.

Captain Lansden graduated from the United States Merchant Marine Academy in Kings Point, New York in 1986. He graduated with a dual degree in both Marine Transportation and Marine Engineering. Upon graduation from this Federal Academy, Captain Lansden immediately began his 30 years of service in the United States Naval Reserve. While serving in the military and U.S. Merchant Marine, he also graduated from Tulane Law School in New Orleans in 1994 specializing in maritime law.

Captain Robert Lansden has always believed and practiced “service above self.” He demonstrated his devotion to helping to others while tirelessly serving the state of Louisiana in the devastating aftermath of Hurricane Katrina. In addition to his countless rescue missions in the city of New Orleans, Captain Lansden directed thousands of gallons of fuel supply to farmers throughout Tangipahoa and Washington Parish to aid in clean-up and stabilization efforts for Louisiana’s farmlands.

Captain Lansden has real “boots on the ground” experience in Southern Iraq. As a Navy Captain, Captain Lansden volunteered for service in 2009 serving as an Army Colonel due the Army’s grave shortage of men. While serving in Iraq, Captain Lansden organized and led over 133 missions “outside the wire” in hostile enemy territory. With God’s guidance and the absolute trust of those in his command, Captain Lansden never lost a single American or Allied solider throughout his time in Iraq. His success and selfless service in Iraq earned him the Bronze Star.

PAID FOR BY LANSDEN FOR LOUISIANA

PAID FOR BY LANSDEN FOR LOUISIANA